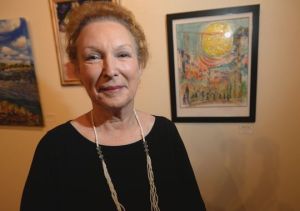 My paintings border on surrealism and impressionism, with an emphasis on environmental consciousness. I recycle discarded objects and incorporate them into my paintings. I am a native Houstonian. A Texas gal at heart, I was among ten youths identified by the Houston Museum of Fine Arts to participate in a weekly three year art instruction scholarship Class. I received the Mary Gibbs four year college scholarship and graduated from Lamar University. My Bachelor of Science Degree was awarded in 1968. I was the Art Teacher at Beaumont High School for 1969. With an eye on economics and travel, I entered federal civil service in 1971. My first assignment was Fort Polk Army Base’s Educational Television Visual Artist. Following my gypsy heart, my daughter and I moved to New York in 1972. There I worked as a West Point Academy Graphic Artist. In 1974, we moved to Bossier City in Louisiana to become Barksdale Air Force Base( AFB) 8th Air Force Command Commercial Illustrator and Arts and Crafts Director respectively. The murals I painted during the years 1974-1981 are on display at the 8th Air Force Museum in Bossier City LA. In 1982, I was promoted to Shaw AFB Graphics Director in South Carolina. Later I served as Arts and Crafts Director at Little Rock AFB and Bergstrom AFB during 1985-88. I rose to MWR Director at Bergstrom AFB 89-90. I sadly left Austin as the base closed and flew to Guam. I served as Recreation Flight Chief until my promotion to HQ PACAF Command Recreation Chief in Hawaii 93-95. Coming home to Texas, I was promoted to Services Division Chief for Laughlin AFB, Del Rio 96-97. My final position before retirement in 2000 was HQ AET Command Recreation Flight Chief.

I moved to Shreveport in 2012 to be near my family. I was an instructor at Shreveport’s 2015 Art Break Program. I have taken up my joy of creating with canvass and brush after many years of outward expressions. I am a North West Louisiana Directory Artist. I was selected by Shreveport Regional Art Council as a collectable artist 2015. I also served as set and costume designer for Shreveport’s Cabaret Community Dinner Theater, production of Tom Sawyer. I won Best In Show in the Shreveport Regional Arts Council Critical Mass III Competition during 2015, which lead to my first solo show at ArtSpace Shreveport, June 21-Aug 1 2015.

I will be adding news here about my latest creations, art shows, and meditation retreats.  Please let me know on the contact page if you would like to be on […]